The first soil carbon credits in Australia were issued by the Clean Energy Regulator yesterday to Corporate Carbon for their Grounds Keeping Carbon Project on a farm in Hallora, Victoria which used an invention developed in the Gippsland Region called Soilkee Renovator and mulcher.

Given the World’s oldest scientific biochar field trial at the NSW DPI Wollongbar site on the Far North Coast of N.S.W. has shown “field-aged biochar enhanced the belowground recovery of new root-derived C (13C) by 20%” (Van Zwieten et al, 2017) , farmers that use biochar made to IBI standards should seriously consider registering a project under the Sequestering carbon in soils in grazing systems method of ERF

Doug Pow, an innovative farmer from Manjimup, Western Australia had an “aha moment” when he was trying to figure out the simplest way to apply biochar to his soil, then it came to him, “we have cows and dung beetles that bury fertiliser all over our farm, I wonder if cows and dung bettles would eat biochar?” Doug said to himself. They did and a paper tabling results was published titled “Feeding Biochar to Cows: An Innovative Solution for Improving Soil Fertility and Farm Productivity” by Joseph et al, 2015 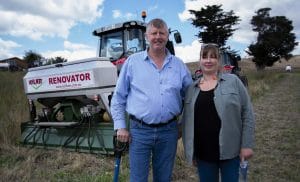